I’m thrilled to be able to introduce you to my friend, creative mentor and gardening guru, Roxane.  She’s helping me out by being a guest blogger while I’m recovering.

Some things you need to know about Roxane.  She’s absolutely one of the most vibrantly creative people I know.  She’s a Master Seamstress (and makes her living manipulating fabric and thread), a generous hostess and a whiz with her camera.  Her websites are Creative Clothing by Roxane, and Sewing the Titanic.  Please take the time to visit.

Roxane has one of the most exuberant, welcoming gardens I have ever seen.  Have a visit, why don’t you?

I have always loved planting things. Where that comes from is anybody’s guess: my mother only had a few plants in the house: a dracaena, a sansevieria and a couple of violets. They were the fashionable plants in those days!! Our yards were not gardens: neither of my parents was much inclined to planting flowers or anything at all. We had a weeping willow in the back yard and a privet hedge at the front. The willow was not actually what we planted. My father bought a poplar sapling which got blown over in a bad storm one summer and a neighbour came over to help. She strapped the sapling to a stick she had lying about her garden…. And THAT is what grew whilst the poplar withered away. It was a branch she had cut from her willow! This has stayed with me all my life! That was the most amazing thing!!!

I can remember buying seed packets in spring on my trips for groceries with my mother. I invariably picked alyssum and hollyhocks with occasional marigolds and sweet peas. I had visions of glorious plants soaring over my head: for the hollyhocks at least. I discovered that alyssum and sweet pea really smelled nice. Marigolds just had flowers later in the season with an exotic, cloying scent… not a rose that, but intriguing nonetheless. For an eight to ten year old, that was all that counted. That lovely house in the suburbs had large expanses of sunny garden which made it almost impossible for things to go wrong!

We moved to the city the summer I turned 14. The new house had a very small and shady garden which was good for the lily of the valley my Mum loved so much. As well as for daylilies, some violet irises and sedum. There was an extravagant weigelia at the front near the steps to the front door. It flowered twice a summer if the flowers were removed after the first spring budding. I sub-consciously decided to have one of those as soon as I could!! This picture below is of my weigelia this year. 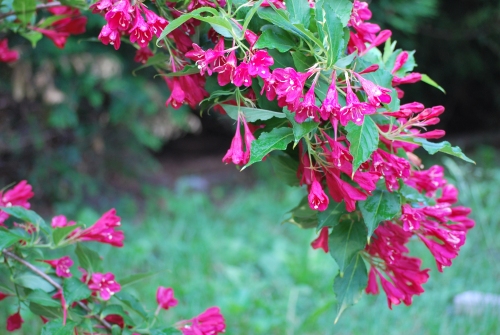 I was exposed to roses, peonies, thyme, hydrangea, ephemeris, lily of the valley and variegated *bishop’s sleeves* at our summer cottage as well as many wild flowers and more subdued *ground cover* things. One of my aunts was the gardener there. The lily of the valley grew under a very large old oak tree. The rest of the plants grew on the top terrace in the sun in very sandy soil. To this day I love the scent of thyme! When the cottage was sold close to 20 years ago I was allowed to make away with some thyme and some bishop’s sleeves as well as one peony and one rose bush. 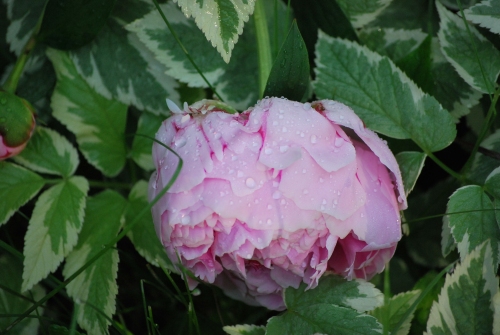 In this picture of a peony you can also see some variegated Bishop’s Sleeves.

But before that, I had already discovered inside gardening!! In my late teens, I got a job in a flower shop called The Flower Pot. There I learned about tropical plants as well as flower arranging. My dad had a few books about tropical plants and I read them inside out and back to front. I became the plant doctor at work. The one they sent to the homes and apartments of people having trouble with their plants. I would bring the small sick ones, the ones that weren’t bought, home from the shop and got them growing again. The owners often told me to not bother bringing them back and that was the start of my indoor jungle. I still have many of those now! They have grown to large plants that go outside for 3 months in the summer and purify the air in our home all winter long. I recently had to dispose of a jade plant I got way back then: I kept some of its tips and they are growing very well. The princess philodendron from the shop is still growing… it has been transferred from pot to pot and home to home and is still hanging in there!

From reading about those plants I went to learning about herbs and garden plants as well as wildflowers. My best education came from actually experimenting with everything. I had very little money to spare on plants at first. So I would buy the last ones at half price or less and I also brought many wildflowers home from the woods and fields near my first house.

I have moved twice since I got the plants from the cottage… The roses didn’t survive the first transplanting. The thyme did better and somehow, the peony survived two moves! They don’t like being moved at all and it’s preferable to do that in the fall!!

I moved to my present home 13 summers ago. It has a large front yard that contained a sadly overgrown and unkempt cherry tree which didn’t flower the first two years I was here… There was dying Forsythia which I pulled out, a huge purple lilac and about 8 old peonies along the front walkway as well as 4 other well-established peonies along the living room window. The back yard had nothing except for non-variegated bishop’s sleeves and a row of honeysuckles between two gigantic maple trees.

This is the front garden near the house, looking from the driveway towards the pond which is under the cherry tree. To the extreme right you can see some of my indoor tropical plants on their summer holiday. This was taken early June.

This is my house from across the road. The cherry tree is in flower and hardly anything has grown yet along the pathway. This was taken early May.

Since then, the gardens have taken a rather different course. I cleaned up and pruned back the cherry tree in the fall and was rewarded with a glorious display of dark pink flowers every spring ever since!!! I’ve even been asked if neighbours’ daughters could come for their prom pictures aside it!! And I now face more garden than lawn… covered in plants I brought in from the woods nearby or have bought at various nurseries, hardware stores and local plant sales or got from other avid gardeners.

This is just a taste of her garden.  There’s much more, so come back.  Roxane’s garden will continue tomorrow.

I’d really love to see your comments on the projects I do and the ideas I have.  I learn more from critiques than praise, but, honestly, I adore praise (and who doesn’t?).

Thanks for stopping by.